Speaker Topic for this Month: “EFHW Antenna” Bill Shanney, W6QR W6TRW welcomes one its own, longtime members, Bill Shanney, W6QR.  A ham operator since 1960, Bill has written many technical articles and stays current with …

Speaker Topic for this Month: “Activating Parks and Summits on 10W (or less!)” Mark Knight, KD7DTS Originally licensed in the late 1990s, I initially got hooked on ham radio as a means of reliable outdoor …

Speaker Topic for this Month: “No Tools Troubleshooting” Wayne Yoshida, KH6WZ Wayne Yoshida is a Technical Writer and CQ Amateur Radio Magazine columnist who brings a cornucopia of writing, editing, technology and marketing skills to …

Swap Meet to Remain at NG Through December 2015 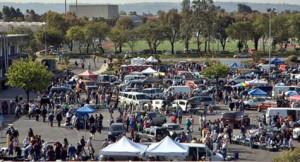 We are pleased to announce that the W6TRW Swap Meet will continue to be held at Northrop Grumman through the end of the year.  This means that Swap Meets and VE Testing will continue as usual through December 2015.

The Swap Meet will be moving to a new location in January, 2016. That location will be announced later this year.

Please keep checking this website for updates as they become available. 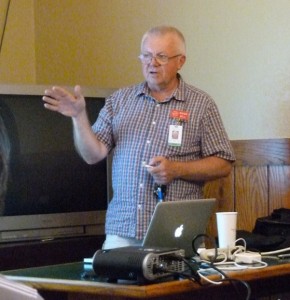 W6TRW welcomes one its own, longtime member, Bill Shanney, W6QR, to center stage.  A ham operator since 1960, Bill has written many technical articles in the club’s Crosstalk newsletter and stays current with ham radio items of interest for beginners to the most advanced operators.

Join us Tuesday night!   Find out why HF is Bill’s favorite band.

After a long period of inactivity (career and family) I upgraded to extra class in 1988 and became very active. That is also the year that I joined the TRW ARC.

I have a BSEE from NJ Institute of Technology and worked for 45 years in RF and microwave design. I retired from NG/TRW in 2007 after 31 years with the company.”

It’s summertime, and the annual ARRL Field Day is here again!  Please join us on 27-28 June at Friendship Park in San Pedro.  There will be lots of opportunities to learn about radio technology and radio operation firsthand, and to get on the air!  It’s also a great time to meet the other W6TRW club members, so don’t miss out!

We are going to operate as class 7A (7 stations, generator power) as we traditionally have done.  We will have several HF bands, digital modes, VHF-UHF stations, the Get-On-The-Air station, and we will be trying for a satellite contact.

Please see the links below for more Field Day information:

Please reply to me, or to our W6TRW web page contact link, to ask for more info or to get involved.  We really want to see you at Field Day and we hope you will get some excellent experience.  You can also contact Ray, KD6IGI, to coordinate or volunteer for any part of Field Day, and you can contact Jason,KD6ELS if you want to help with setup on Friday 26 June or teardown on Sunday 28 June.

The map of the local area around Friendship Park is here.  It shows the location of our Field Day setup, on the high ground in the park.

During the Field Day operations (9 AM Saturday 27 June to noon Sunday 28 June), for entry, call:

Call for any of the following call signs:

We will get you into the site. 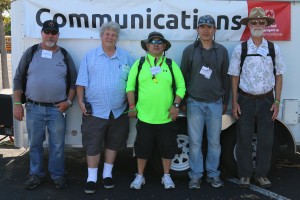 This was probably the best showing and representation of W6TRW club members ever for Special Olympics working with Mark Lidikay’s group SCRAN.

On Saturday after the games ended for the day, our volunteers were all treated to a great dinner at the “Dog Pound” (the Dog Pound is the distribution Nerve Center for all Special Olympic Staff members and key Volunteers). Anniversary awards were given to volunteers and staff members.

The games went extremely well as the athletes enjoyed a smooth and well orchestrated Special Olympics event. Amateur Radio is appreciated and requested each year for both Summer Games and Fall Special Olympic Games.

Special Olympics is a hard event to work, not anyone can do this, but the people who do volunteer work at this event and the Special Olympic staff members are the best people I have ever volunteered for. I for one am grateful to Mike, John, Douglas and Michael for their support, I think I received the best radio operators the club had to offer.  Special thanks to all W6TRW club members for a job well done.

END_OF_DOCUMENT_TOKEN_TO_BE_REPLACED 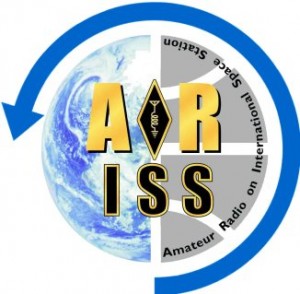 Get ready for the world of Amateur Radio on the ISS:  Hams in Space!  Charlie Sufana, AJ9N, will show us his latest work with ARISS and video of a radio contact with an astronaut.  AJ9N and ARISS have been inspiring students as an interface between the schools and NASA.

Please see the ARISS flyer.  This will be a very interesting and informative presentation, and should be relevant to our planned satellite contact effort at Field Day.  Perhaps some W6TRW members can share their satellite, MIR or ISS contact experiences. 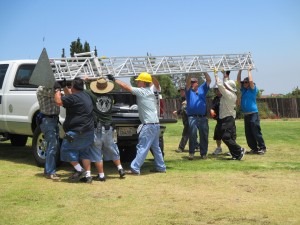 Since the first ARRL Field Day in 1933, radio amateurs throughout North America have practiced the rapid deployment of radio communications equipment in environments ranging from operations under tents in remote areas to operations inside Emergency Operations Centers (EOCs). Operations using emergency and alternative power sources are highly encouraged, since electricity and other public infrastructures are often among the first to fail during a natural disaster or severe weather.

W6TRW plans to set up 7 separate stations operating simultaneously on HF through UHF in the park using emergency power generators. We’ll also use solar power, batteries, and satellites for communications and set up a special youth station operated by scouts.

Setup will start on Friday, June 26. Field Day operating will be from 11:00 AM Saturday, June 27 until 11:00 AM Sunday, June 28. Sunday afternoon will be teardown of the towers, antennas, and equipment and cleanup of the site.

All of this can’t happen without a lot of dedicated people. We’re looking for help setting up, operating, and teardown afterwards. If you are interested in participating in Field Day with W6TRW, contact Club President and Field Day Chair Greg Shreve by clicking on the “Contact” tab on the web site and sending your message.

We will have a great event and great activities. Come out and join us and learn what fun amateur radio can be and how to get your amateur radio ‘ham’ license before the next disaster strikes.

More details are on our Field Day page. 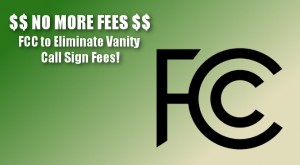 The FCC has found that it costs the agency more to process the regulatory fees for amateur radio vanity call signs and other services such as GMRS than the fees themselves cover. Rather than increasing the rate, the FCC has decided to eliminate them altogether. This change will not go into effect until the required congressional notice has been given, which typically takes at least 90 days. Any fees paid prior to the institution of the change will not be refunded. This is great news and a welcome change from the tedious fee recovery process that has been normal.

The FCC is eliminating the regulatory fee to apply for an Amateur Radio vanity call sign. The change will not go into effect, however, until required congressional notice has been given. This will take at least 90 days. As the Commission explained in a Notice of Proposed Rulemaking, Report and Order, and Order (MD Docket 14-92 and others), released May 21, it’s a matter of simple economics.

In its 2014 Notice of Proposed Rule Making (NPRM) regarding the assessment and collection of regulatory fees for FY 2014, the FCC had sought comment on eliminating several smaller regulatory fee categories, such as those for vanity call signs and GMRS. It concluded in the subsequent Report and Order (R&O) last summer, however, that it did not have “adequate support to determine whether the cost of recovery and burden on small entities outweighed the collected revenue or whether eliminating the fee would adversely affect the licensing process.”

The FCC said it has since had an opportunity to obtain and analyze support concerning the collection of the regulatory fees for Amateur Vanity and GMRS, which the FCC said comprise, on average, more than 20,000 licenses that are newly obtained or renewed, every 10 and 5 years, respectively.

“The Commission often receives multiple applications for the same vanity call sign, but only one applicant can be issued that call sign,” the FCC explained. “In such cases, the Commission issues refunds for all the remaining applicants. In addition to staff and computer time to process payments and issue refunds, there is an additional expense to issue checks for the applicants who cannot be refunded electronically.”

The FCC said it would not issue refunds to licensees who paid the regulatory fee prior to its official elimination. 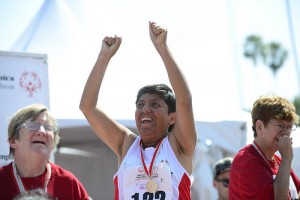 Special Olympics Summer Games at California State University, Long Beach provides a great training opportunity for anyone wishing to develop their radio communication skills, with many different scenarios that occur during this event.

The date of the games is 13-14 June 2015, but you must sign up to volunteer before the end of May.  Please contact Scott Marsiglia KI6KWI now to learn more and to get the sign-up form.

This is an interesting and varied radio opportunity, and a big help to a great organization.  The activities of the radio volunteers include:

The radio activities are coordinated by a southern California amateur radio organization that has worked this event before, so there is good experience and proper organization going into the event. 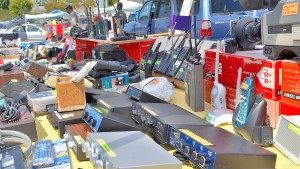 In March, the W6TRW Amateur Radio Club learned that we will no longer be able to hold our monthly Swap Meet at its current location at Northrop Grumman in Redondo Beach.  At the March and April Swap Meets we posted and handed out flyers informing everyone of the changes coming and what our plans are. A copy of the flyer can be found here.

We’ve since heard a lot of rumors and speculation from the ham community about what’s going to happen. Here is latest news direct from the horse’s, err, mouth:

What happens in September and beyond? I wish I had a solid answer to that question but, as of right now, things are still up in the air. It is our intention to keep holding the Swap Meet every month, just at a different location. Right now, that location has not been decided but we have some irons in the fire.

We want to keep it in the South Bay area and that limits our choices since we need a pretty big parking lot to adequately accommodate our sellers and buyers. We are in contact with folks at several venues and are working to ink a long-term contract. The last thing we want to do is move again six months down the road. So we are doing our due diligence to make sure all the pieces of the puzzle fall into place.

And that’s really all I can tell you right now because that’s all I know. As soon as we know more, we’ll let you know about it. You can follow us on our web site at w6trw.com, on Twitter at twitter.com/w6trwswapmeet, on Facebook at facebook.com/w6trwswapmeet, or our email list on Yahoo at groups.yahoo.com/w6trwswapmeet.  Yeah, we’re going all social media on you.

We’ve been holding a monthly Swap Meet for almost 40 years and plan to keep going for another 40. We can’t do it without your support and we really thank you for making the Swap Meet what it is – the biggest Ham Radio event in Southern California. The world famous W6TRW Swap Meet!  Come out out to the next one on May 30th.

W6TRW Has a New Web Site 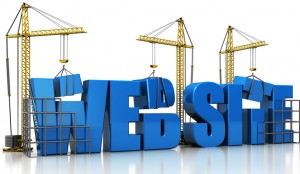 It’s been a long time in the making but we are finally building a new and improved web site for the club. Please be patient as we get things working and updated.  Expect to see some really cool stuff as we build out the site.