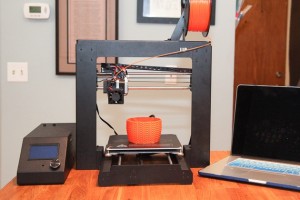 3D printing or additive manufacturing is a process of making three dimensional solid objects from a digital file. Available and affordable for the consumer, Alan offers some guidance for 3D printers, and what features to consider before diving in: Product, Programs, 3D Models, and Materials.

KC7O holds a Bachelor of Science degree in Electrical Engineering, RF Communications, from Drexel University, Philadelphia, PA. With over 45 years’ experience in aerospace manufacturing operations and quality management, he has worked on the Lunar Module including Apollo 11, military communications systems, commercial/military aircraft, spacecraft, computers, and RFID.

Since 1984, Allen has been a member of the Pasadena Radio Club and has served as a past president. In 1999, he was awarded the ARRL’s Herb Brier Instructor of the Year award for 17 years of teaching Novice and Technician classes. Currently, KC7O supports local police by leading the Sierra Madre Emergency Communications Team.